Evaluating restoration success at wet meadows in the Southern Cascades 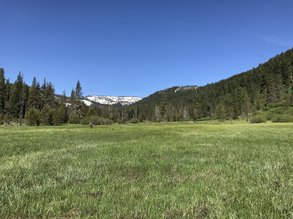 Drakesbad Meadow, Lassen National Park
​
Restoration potential of Drakesbad Meadow was assessed between 2002-2004 (Peterson and Cooper, 2007) and some ditches identified as "high priority" were filled in 2012. During summers of 2017 &2019 we investigated the effects of the restoration on groundwater depths and resulting plant community of the meadow. In summer 2021, the Dixie Fire burned the surrounding forested area. We investigated any changes that occurred due to the wildfire in summer 2022. 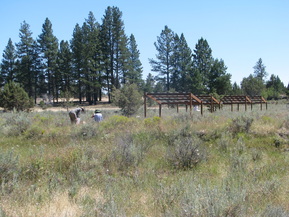 The Oregon International Drought Experiment (ORIDE) research project is a collaboration between myself and Dr. Kerry Byrne (Cal Poly Humboldt). Research began in Summer 2016 with the construction of rainout shelters.  For 4 years (2016-2020) we examined the effect of drought on changes in plant community composition, above and belowground productivity and physiological responses of the two dominant species of sagebrush (Artemesia cana and A. arbuscula).  The field site is located in Southeastern Oregon near the Gerber Reservoir.

Between 2010 and 2017 I worked on three different projects examining willow dieback and restoration across Rocky Mountain National Park. 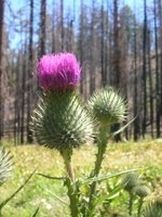 My master's work involved examining the relationship of invasive species and burn severity in Wilderness of Yosemite National Park. We used a three year old burn in a mixed conifer forest north of the Tioga Road. We examined non-native species density three years after the Tuolumne Fire, which burned 1540 ha in upper montane forest in California, USA. We sampled 60 plots, stratified by burn severity (low, moderate, or high severity) and landscape position (lowland or upland). We detected non-native species in 8 of 11 (73 %) of high severity lowland sites and in 5 of 10 (50 %) of moderate severity lowland sites but, overall, richness and abundance was low. We detected only five non-native species, of which bull thistle (Cirsium vulgare) was the most common.
​